Anyone who follows wine is certain to be aware to the dreaded word ‘Phylloxera’. It is a disease which once threatened to wipe out almost the entire vine population in European vineyards, and France being a major producer of wine was naturally severely affected.

But as goes the proverb that every dark cloud has a silver lining. And so was the case in champagne where phylloxera inadvertently proved a bit advantageous. However, here I add the caveat that this certainly did not reduce the immense suffering this dreaded disease caused to the Champenois.

Phylloxera had reached France in 1860s and over a period of next 2 to 3 decades devastated the vineyards in almost all parts of the country. Though all out efforts were made to fight this menace and even a dedicated committee was formed to tackle the disease but all this was of no avail in controlling the damage. Some compare it to the devastating plague epidemic in medieval times.

Surprisingly though, the Champagne vineyards remained untouched by Phylloxera for quite a period of time. Infact it was only in closing years of the century that Champagne region got affected in a major way.

What could be the reason for this ?

Well, initially the Champenois took pride in the fact that their indigenous viticultural techniques kept the aphids at bay. However, the actual reason was that being located in northerly region of France, the severe cold climate insulated the area from the rapid onslaught of the disease.
Eventually it was found out that American vines, Vitis riparia were resistant to phylloxera and that by grafting French Vitis vinifera vines onto the American root stocks, phylloxera could be eliminated. This was done by routing out old vines and re-planting the grafted vines all over French vineyards.

So back to my initial statement that how did all this help champagne?

To explain this let me take a divergence here to highlight the other major happening in France at that time which is popularly known as ‘Belle Epoque’. This period which roughly coincided with Phylloxera at the turn of 18th century, was marked with peace, prosperity, happiness and also frivolity. And all this bore well for champagne which had by that time established itself as a wine synonymous with celebration, luxury and success.

So whereas phylloxera resulted in drastic reduction in availability of other wines like those from Rhone, Bordeaux and Burgundy etc but since champagne remained unscathed, it boomed in sales and profits soared. Further, by the time phylloxera finally affected champagne region, its cure by grating was already discovered and rapid replanting ensued.

And this replanting also benefitted Champagne. Prior to phylloxera, vines were grown in a random crowded method (en foule). Whereas at time of replanting, the new grafted vines were then planted in rows. This facilitated horses and later tractors and other machinery to work in the vineyards which made vineyard work much more effective and easy. 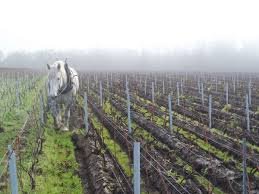 Wines, Real Estate and Art are three things which I’m passionate about. A Masters degree in Real Estate Management and a WSET Level 3 in wines help me in this journey.