Sometime around mid-August each year, Italy witnesses a prolific meteor shower in its skies (it is called as the Perseids Meteor Shower). Over the years the wineries started organizing wine tastings during this period. The event came to be known as ‘Calici di Stelle’ which literally means “Wine Under the Stars”. This soon turned into an annual wine tasting tradition in Italy with most regions observing it around August 10, which is the official date for the most abundant period of the meteor shower.

The date itself is associated with the legend of San Lorenzo and throughout Italy it is observed as the feast day of saint San Lorenzo. It is said the stars which fall during the meteor shower are actually the saint’s tears.

So who was San Lorenzo and what is the story associated with him?   As the folklore goes, San Lorenzo purportedly spirited away the Holy Grail for safe keeping in his youth. Later, in 258 AD, he was martyred when he presented Rome’s poor and sick instead of gold and silver to the prefect who had demanded of Lorenzo all the church’s treasures. Sentenced to being slow-roasted alive on a grill, it is said that he joked “I am done on this side — turn me over,” earning him the honor of being designated the patron saint of cooks and chefs.

So, in a somewhat dark way, it seems appropriate that various regions in Italy celebrate this night of the meteor showers with their regional wine and food. 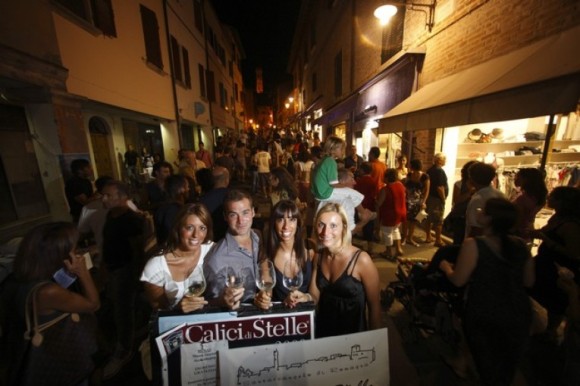 Interestingly, this astronomical event has also been a theme for a popular Italian movie called “The Night of the Shooting Stars” that uses the dreaminess of the night-time spectacle to project the struggles of a World War II Tuscan village.

So if you happen to be in Italy and happen to attend one of Calici de Stelle feasts with food and wine then do share your experience.

I'm a WSET Level 3 wine enthusiast. Got introduced to the world of wines a bit late in life - and it has been an amazing journey since then. Hope to connect with wine lovers world over and share wine experiences. Do share your wine stories. Happy connecting. Cheers.

Is their any vineyard or winemaker activity during the meteor shower linked to biodynamics as in phases of the moon etc?